Review of Flowers for Algernon by Daniel Keyes 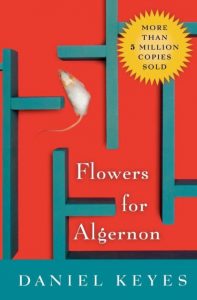 A stable read for first and secondary schools across America, Flowers for Algernon deeply touches upon the ideas of human morality and relationships. The story follows Charlie Gordon, a thirty-two-year-old man with an I.Q. of 68. Through his teacher, Ms. Kinnian, Charlie is selected for an experimental operation. The procedure aims to increase Charlie’s intelligence quotient, and does fulfill this. Months after being operated on Charlie’s IQ reaches the 99th percentile. However he soon realizes that though he has intelligence in logic, he does not have properly developed emotional intelligence. This imbalance is what causes most of Charlie’s problems. He damages his relationships with Ms. Kinnian, neighbors, and the doctors of the experiment. He also loses stable employment at a bakery. Towards the conclusion Charlie’s I.Q. begins to trend downwards. He loses most of his newly revealed memories, and reaches the point in intellect at which he started. To prepare for his potentially fatal demise, Charlie plans to admit himself to the Warren State Home, an institution which houses the mentally disabled.

Rating (10 being the best): This novel deserves a seven out of ten. The text is formatted in an unusual manner; small reports by Charlie describe his experiences across days at a time. The development of Charlie is done fabulously. The reader can see Gordon’s intellectual growth through his ideas, grammar, and spelling. Another well done aspect is Charlie’s relationships. His major change is well accounted for in the feelings of those around him. This story is an influential work of science-fiction which should be read and examined by any reader.

Review of Wuthering Heights by Emily Bronte
Comments are closed.