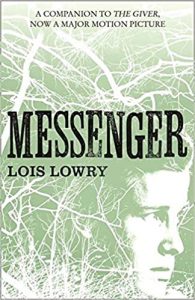 Messenger tells the story of Matty, a teenage boy. The reader witnesses Matty’s personal development, as he comes to discover supernatural powers contained within himself. He lives in Village with Seer, a blind man Matty takes care of. As the town folks’ personalities begin to drastically change, and they have voted to close Village off from outsiders, Matty takes a journey to bring back Seer’s daughter before it is too late. It should be noted that this novel is set in the same universe as the novel The Giver, also written by Lois Lowry. The leader of Village in Messenger is the same male who arrived at the comforting building in this last scene of The Giver.

Rating (10 being the best): This novel deserves a five out of ten. The novel is short, and quite imaginative, however does an excellent job of not leaving the reader with many unanswered questions. The characters of the story hold values, and are given explanation for their changes. The novel does not give way to much confusion. The relationship between Matty and Seer can be seen as interesting, considering its foreign nature to the average person. This text can easily be read in around a couple of hours, and provides enough material to ask rejuvenating philosophical questions.

Review of Where the Crawdads Sing by Delia Owens

Review of Panic by Lauren Oliver
Comments are closed.