Review of Midnight at the Blackbird Café by Heather Webber 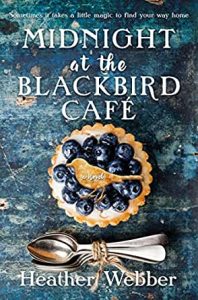 Boring, tedious, and unoriginal are all adjectives that could reasonably describe Midnight at the Blackbird Cafe. The story takes place in Wicklow, Alabama, with a girl by the name of  Anna Kate arriving back in town for a funeral. Her grandmother has perished, and passed her café into the control of Anna Kate. Another girl, Natalie, becomes interested in the cafe’s famous “blackbird pie” as well as comes to befriend and work under Anna Kate. Blackbirds who visit the cafe at midnight attract a group of bird watchers, due to their rare existence in this area. Anna Kate’s grandmother and Natalie’s mother are revealed to have once had a true hatred for each other, as Natalie’s mother blames Anna Kate’s mother for the death of Natalie’s brother. Ultimately the two (yet truly one) families come to accept one another, as well as both Anna Kate and Natalie pursue local love interests. Each girl initially faces hardship, but conquers their troubles in a final conclusion.

Rating (10 being the best): This novel deserves a two out of ten rating. It has a truly predictable, and therefore weak, storyline. After meeting each character, one can easily figure out how each will handle their employment, immediate family relationships, romantic relations, and schooling. Many may be bored by the constant character development, as they already know the end result. Though there are only a few common cliches, the word choice within lines feels rudimentary. This novel feels basic; it resembles common cheap romance movies that consistently follow an all-too-similar format.

5 Tried-and-true Ways to Use Your Library Card
Comments are closed.