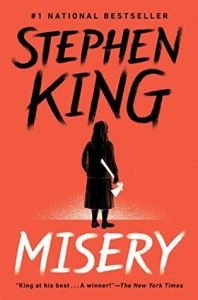 Annie Wilkes, a murderous ex-nurse so mentally deranged that her actions can not precisely be given motivation. She kidnaps the ever-so-popular author Paul Sheldon after he crashes his 74’ Camaro during a heavy Colorado snow storm. Back at her home, a secluded house and barn in a portion of Colorado’s Western Slope, Annie has placed Paul in an empty locked room. Both of Paul’s legs are heavily damaged, and so in addition to not being able to walk he is in extreme pain. Annie proceeds to begin caring for Paul in her own home, giving him medication she stole while a working nurse. She does this without ever alerting authorities to his location. It is soon revealed that Annie is a superfan of Sheldon’s work, specifically a series containing the character Misery. After recovering slightly Paul learns that she is upset with the death of Misery, and wants Paul to write a whole new novel titled, “Misery’s Return”. Paul is a hostage, and his captor is mentally unstable. On one instance of him taking an excursion from his room Paul learns Annie has killed more than thirty people, as recorded in a scrapbook. Annie Wilkes keeps Paul in her care as best she can, even going through such measures as cutting off one of his feet. Annie is determined to receive her own personal copy of “Misery’s Return”, and simply does/can not care about anything or anyone else including state troopers, cows, and in some cases, the author.

Rating (10 being the best): This novel deserves a nine out of ten. Stephen King creates such fantastic suspense throughout, as well as presents such an intimidating and complex antagonist. Annie’s behavior is so unpredictable that to many readers unexpected yet appreciated plot twists occur. Though Misery tends to get overlooked in the grand scheme of King’s novels, the novel presents a type of horror unique to itself. The concepts of isolation, fear, adaptation, and hope are represented in this grim story. Misery will leave any reader satisfied.

Review of When We Were Lost by Kevin Wignall
Comments are closed.