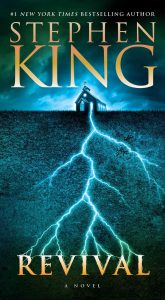 Jamie Morton is only six-years-old when he meets his rural Maine town’s new preacher. The Methodist priest, Charles Jacobs, brings with him his wife, Patty, and five-year-old son, Morrie. The entire hamlet is excited for their arrival, but soon expresses utter horror at his behavior. Patty and Morrie are killed in a brutal accident involving an epileptic farmer. Though this alone does not scare the believers; soon after Jacobs’ final sermon is filled with heaping piles of blasphemy, doubt, and thoughts on electricity. Charlie’s greatest hobby is, simply, the utilization of electricity. Earlier in the story Jacobs heals the voice of Jamie’s recently mute brother using “electricity”. After the foul-mouthed sermon, Charles is recommended to leave town and from a fresh start. In the meantime Jamie Morton grows into a guitarist, university student, and then heroine addict. Following a rather drug-induced night Jamie’s band abandons him, so Morton heads to a local carnival for his next fix. There he meets Charles for the second time, who is now running a stand in which he uses electricity to create photos for a crowd. Upon exchanging dialects, Jacobs takes in Morton to allow him to rest and ultimately eradicates his dependence on heroin. One of the most prevalent aspects of the story is that of addiction, not only with drugs but also with electricity. However Jamie has not been healed fully, as numerous after effects plague his mind. The “healing” is truly a case of uncertain risk versus hefty reward. Like numerous others the “rev” (Jacobs’ new title) remedies, Jamie receives nightmares, intense and bodily-harmful sessions of sleepwalking, as well as lifelike visions. The “fixed” are known to kill themselves over time, as their suffering becomes too much of a burden. While employed at a recording studio in Colorado, Jamie travels to upstate New York to confront Charles. Charles offers Morton a job, though he does not accept. This holds true until Jacobs decides that unless Jamie joins him he will allow an old friend of Jamie’s to die of lung cancer instead of healing her. Jamie feels obligated to fulfill the position, and so does. While there he ultimately discovers that Charlie plans to glimpse into the afterlife, and helps him complete this with the sacrifice of a young woman.

Rating (10 being the best): This novel deserves an eight out of ten. The setting of a rural town in Maine is perfectly represented through the use of teenager bands, the freedom of small children, as well as a small town parish. Stephen King’s life experiences clearly worked themselves into his writing. Addiction is represented in multiple ways, as well as the idea of destiny. It was from the beginning that Charles Jacobs knew he would find Jamie Morton again. On another note the storyline is unpredictable, and therefore interesting. Towards the end of the novel there is great suspense cleverly developed by King to last for many moments. To some, Revival will seem dark, confusing, and horrifying. The text will provide sufficient entertainment for its pages.

Review of Midnight at the Blackbird Café by Heather Webber
Comments are closed.