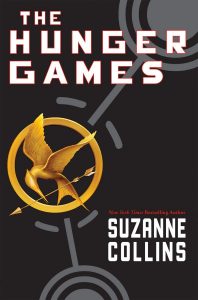 One of the most influential novels of its time, the release of The Hunger Games not only affected the literature community but also many fields of entertainment. The story’s setting is a heavily-regulated form of America, Panem, where citizens have little freedom and their success is limited. Once a year twenty-four citizens from the ages of 12-18 are chosen to compete in the Hunger Games, a televised show of survival. Specifically two people from districts 1-12 are chosen, and on a basis of age and wealth. The book explores how prejudice affects the residents of Panem. The competitors are commonly obligated to take force against one another, as the goal of the game is to be the last person alive. Katniss Everdeen, the main protagonist, fills her sister spot when she is chosen to represent district 12. Together Katniss and Peeta, a local boy in district 12, compete in the game and become the final two survivors remaining. However instead of killing one another, they chose to betray the system and instead spark a rebellion against their government.

Rating (10 being the best): This novel deserves an eight out of ten rating. Both fast and slow paced moments hold one’s attention, as there is much to learn about the word Collins has created. Each character is developed thoughtfully, and in a story of such uncertainty, every event surprises the reader. The text will undoubtedly keep a person on the edge of their seat.

Review of Flowers for Algernon by Daniel Keyes
Comments are closed.