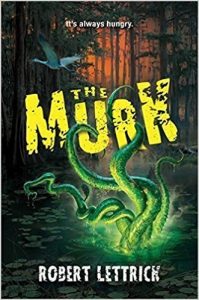 Mostly set deep in the Okefenokee Swamp, The Murk follows three young adults as they search for an unfathomably powerful “silver flower” to save the life of a toddler. The story follows Piper, her brother, Monty, and her friend, Tad, as they travel by swamp-boat through canals untouched by mankind, but not by monster. A virus originating at the site of the “silver flower” is now present in most of the surrounding wildlife. This illness causes the wild beasts to solely protect the blossom at any cost. The trio fight through unfamiliar terrain in an unsuitable environment, as well as are constantly preyed upon by unfamiliar vegetation. The journey does not end with any major developments, only success materialistically.

Rating (10 being the best): This novel deserves a four out of ten rating. Though it has a very basic storyline, and its characters behave peculiarly, the concepts found within are the result of imaginative creation. Considering the flow of the story, this is an aspect it is laking in. Each chapter ends with an excerpt of a Biologist’s journal. And is an issue as the reader may get wound up from action, but then lose their focus during a page or two of unneeded lore. The Murk takes the reader on a vivid adventure; the sights and smells described are relatable to the average reader. The story is with enough detail and intensity to challenge its lacking parts.

Review of The Hunger Games by Suzanne Collins
Comments are closed.