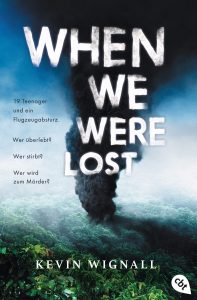 Fate, destiny; the idea that our future demise has already been planned. This is believed as true to some, but not all. The character of Tom specifically displays this mindset. Tom, along with more than twenty of his fellow teachers and students, finds himself in a precarious position. A plane they were aboard crashes into a thick rainforest. A simple naturation observation trip has turned into a likely fatal survival situation. After examining the surrounding wreckage of their airliner, Tom and Alice form a rather unlikely friendship over the idea of escape. Tom shares with her his plan of action: he will be leaving the aircraft in three days. Numerous other students secure a place, and a plan is devised. On top of a ledge Tom spots a river deep in the thicket, and believes they will be able to traverse it using the unopened life rafts of the plane. In time the whole student body decides to make the track. But before this two students perish, one of heat exhaustion and the other of fatal wounding by a Jaguar. It is after the jaguar-killing Tom truly expands upon fate. Earlier that day he had a confrontation with a jaguar, possibly the noted killer. Tom decides that his fateful demise is still to come, unlike the student’s was. The group of peers reach a section of the river, and set up a camp. In the distance they spot a pillar of smoke, so Tom and a few others investigate the fire. To their surprise it is an operational cocaine farm, and after trying to make contact two of the explorers are captured. Tom is forced to murder over ten men to save his freinds, and earns himself a canine companion in return. After a few days, the refugees embark on their previously planned river route. In less than twenty-four hours they reach a proper civilization, and are processed accordingly.

Rating (10 being the best): This novel deserves a four out of ten. Most readers will find this novel rather predictable, and therefore unentertaining. There simply are too many characters who never die no matter what they face. One might call this plot armor. Though acceptable for Tom, as he is the protagonist, most characters seem to be coated with this value. Another unlikable aspect is the shallowness of the students. Their thoughts are rarely ever explored, and most seem to never have opinions. One could argue that this degrades an aspect of realism from the story. The book is a quick and easy read which will neither bore nor impress.

Review of Revival by Stephen King
Comments are closed.